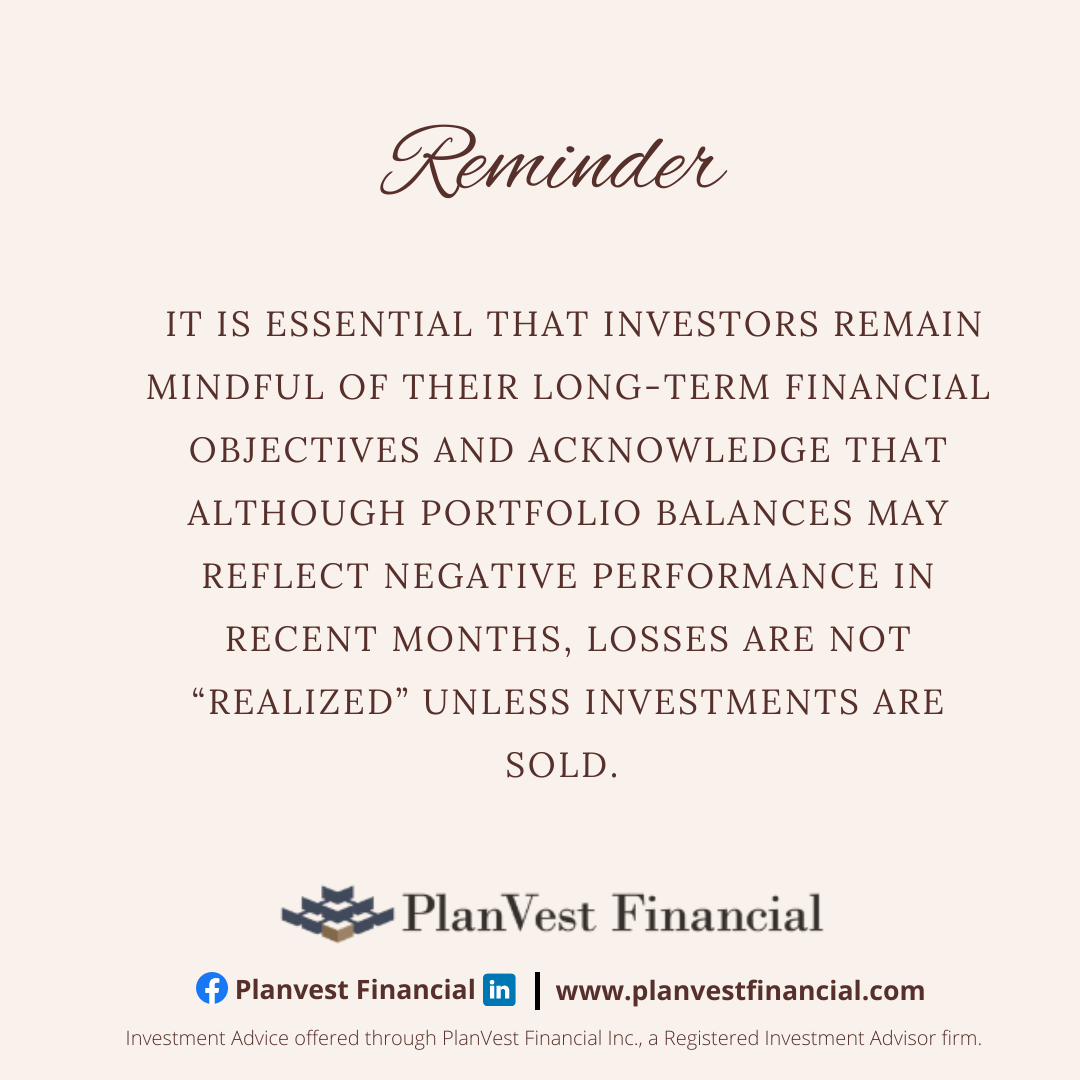 Everywhere investors look these days, it seems that only bad news is found. Major ongoing conflicts continue to impact the economy and financial markets.  The COVID-19 pandemic remains an issue since its initial outbreak in 2020. The pandemic has claimed millions of lives worldwide and decreased global economic productivity for major advanced economies including the U.S., which are expected to underperform in the next couple of years. Other global issues which have hindered the economic landscape are global supply chain issues as well as geopolitical issues including the Russia-Ukraine war and ongoing trade tensions between the U.S. and China. All these factors have contributed to one of the most prevalent issue, high inflation.

On June 10, 2022, the U.S. Department of Labor released its Consumer Price Index (CPI) for the month of May. The index had increased 8.6% over the past 12 months. CPI measures a market basket of goods and services paid by urban consumers. This number is particularly important, as consumer consumption is about two-thirds of the US economy. This was the largest 12-month increase since December 1981. In 1981, the economy had officially entered a recession in the third quarter of 1981, with the unemployment rate reaching as high as 10% in 1982. Fortunately, current unemployment remains low at 3.6% and consumer pocketbooks are in reasonable shape, which may buffer the economy some, if we enter into a recession.

Many Americans are already feeling the impact of high inflation in their daily lives when buying food, household goods and filling up their tanks at the gas pump. As of June 16, 2022, the national average for regular gasoline sits at $5.01 per gallon while diesel is at $5.79 per gallon. However, several states are already paying much higher prices, such as California where the average price for regular gasoline is $6.43 per gallon, leaving many Americans wondering how much higher prices can go. Currently, it appears that there are no plans in action to increase domestic production of oil and gas in an attempt to lower prices. On June 10, 2022, the Special Presidential Envoy for Climate, John Kerry, announced that “We (United States) absolutely do not” need to drill for more oil and gas at this time during a talk with the USC Center for Public Diplomacy. The following CPI table reflects the change in prices for the past 12 months. 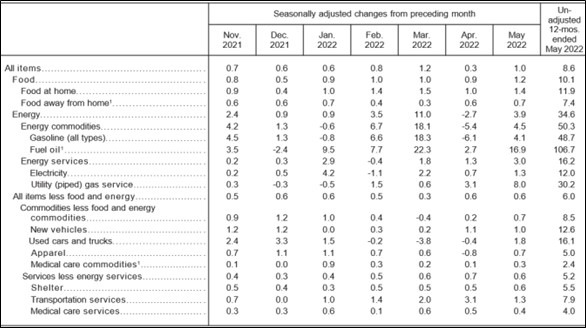 Many analysts view real estate and housing in times of uncertainty as a hedge against inflation. Homeowners, including landlords have experienced the benefits of appreciation in their home values due to rising shelter prices and increased buyer demand in recent years. Home prices were up 20.6% in March from the year before, according to the S&P CoreLogic Case-Shiller US National Home Price Index. This was the highest year-over-year price change in more than 35 years of data. Economists are predicting a shift in this trend moving forward as many homebuyers are being priced out due to increasing home prices and rising interest rates. As of June 15, 2022, average mortgage rates have now surged above 6%, their Highest Level Since 2008. Builders are already anticipating this shift as Homebuilder confidence dropped in June for the sixth consecutive month according to the NAHB/HMI report released on June 15, 2022.

At the beginning of this year the average for a 30-year fixed-rate mortgage was about 3.25%, this week it reached 6.28%. Additionally, home prices were over 20% higher in March of 2022 versus 2021. This combination of higher home prices and higher mortgage rates has crushed home affordability. For example, on a $400,000 home, with a 20% down payment, the monthly mortgage payment went from $1,392 at the start of this year to $1,976 today, a difference of $584/month, not including homeowners’ insurance or property taxes.

Investors worldwide have felt the impact of the economic decline as the S&P 500 officially entered bear territory, with a decline of over 20% reached on June 13, 2022. The Nasdaq, comprised mostly of tech stocks, had already entered bear market territory back in March, with its total decline from its year-high now off more than 32%. The Russell 2000, which measures the performance of about 2,000 of the small/mid-cap companies in the U.S. is down about 27% YTD. Through Thursday, June 16th this is where the major U.S. markets were sitting Year-to-Date:

Investors have seen negative returns across the 11 sectors that make up the S&P 500 as reflected: 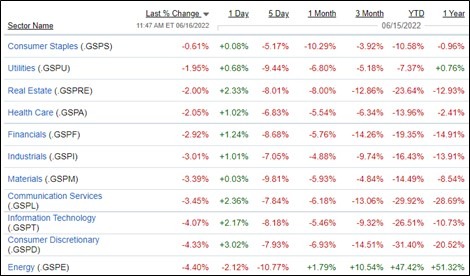 Depending on an investor’s risk profile, a diversified portfolio includes bonds in addition to stocks and other investments. However, bonds have also not fared well either this year. For example, the S&P Aggregate Bond Index (Ticker: AGG), which tracks the performance of the total U.S. investment-grade bond market is down nearly 12%, year-to-date. Bond investors are facing steep losses from negative appreciation (due to rising interest rates) as well as high inflation of 8.6% which is far exceeding the AGG average annual yield of 2.92%.

On Wednesday, June 15, 2022, the Federal Reserve (Fed) raised the Federal Funds rate by 75 basis points (0.75%).  This marked the FED’s largest increase since 1994. The federal funds rate now sits at 1.75%. While not yet close to 1981 levels, inflation is running at a 40-year high as the Fed aims to slow down the economy with the goal of getting inflation under control. Federal Reserve Officials are expecting additional rate increases with the federal funds rate rising to at least 3% and as high as 3.375% by the end of this year. However, as Fed Chairman Jerome Powell stated at his news conference on Wednesday, this remains subject to change depending on how the market and economy react to each rate increase.

Historically, there have been 12 economic recessions (generally defined as a decline in GDP for two successive quarters) since World War II. On average, these recessions have lasted only 10 months while periods of expansion have lasted 57 months rebounding well above the losses incurred during the recessions.

The S&P 500 fell into a bear market on Monday, June 13th, down more than 20% from its record high on January 3, 2022. Many stocks that soared during the pandemic rally, such as those in the technology and consumer-discretionary sectors, have been hit hard in this year’s downturn. Since 1950, the S&P 500’s median return one year after closing in a bear market was up 23.9%. Stocks were down in the year following bear-market entrances three out of twelve times since 1950 as shown in the chart below.

S&P 500 returns after closing in a bear market

It is essential that investors remain mindful of their long-term financial objectives and acknowledge that although portfolio balances may reflect negative performance in recent months, losses are not “realized” unless investments are sold.

We hope you have found this commentary insightful and a reminder that time in the market beats trying to time the market.

Disclosure: The content is developed from sources believed to be providing accurate information. The information in this material is not intended as tax or legal advice. Please consult our professionals for specific information regarding your individual situation. The opinions expressed and material provided are for general information and should not be considered a solicitation for the purchase or sale of any security.